An ensemble Cracow Guitar Quartet was founded in 2006 and is composed of artists who are bound with Krakow: Milosz Maczynski, Joanna Baran-Nosiadek, Lukasz Dobrowolski and Mateusz Puter.

The ensemble has been involved in implementing many music projects both in Poland and abroad and has been performing at the most prestigious guitar music festivals. The quartet has been conducting master classes for young virtuosos of classical guitar and has also been recording for Polish Radio and TV (including live in concert recording in the studio of the Polish Radio in Katowice).

In 2010 the CM Records published the CD of the quartet "From Ballet to Tango" demonstrating the beauty and richness of dance music spreading over from the Renaissance to modernity. This recording received excellent reviews in the Polish and foreign music press. In 2019 the ensemble officially represented Poland at the special concert of Cracow Guitar Quartet at St Giles' Cathedral in Edinburgh. In April 2022 the ensemble published a new album entitled “Musical Landscapes” (DUX Recording Producers) which is now arousing music lovers' large interest.

At present the Cracow Guitar Quartet is regarded as an outstanding Polish ensemble in classical guitar. 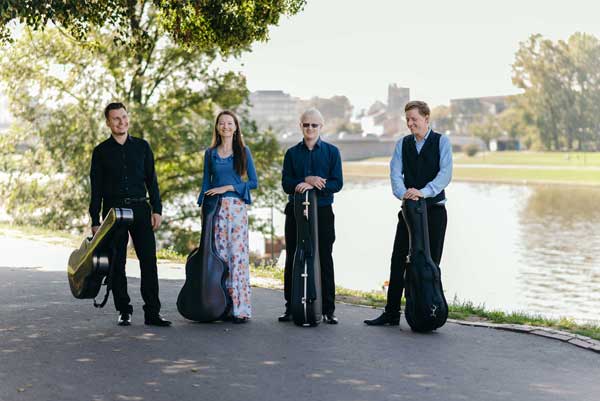 Cracow Guitar Quartet has been performed for among others: 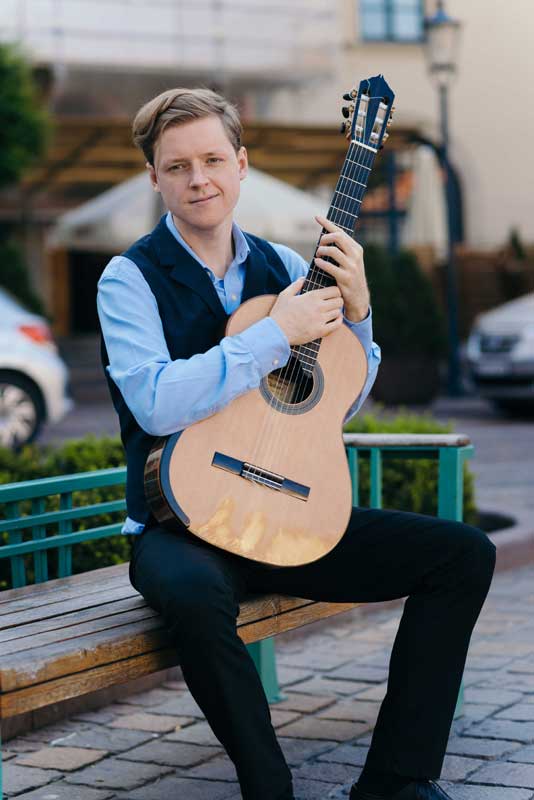 Milosz Maczynski graduated with honours from the Krzysztof Penderecki Academy of Music in Krakow in the guitar class of Professor Michael Nagy in 2010. In 2014, under the supervision of Professor Janusz Sochacki, he defended his doctoral dissertation and received the degree of Doctor of Arts. Since 2015 he has been conducting the class of guitar in the Krakow Academy.

He has performed as a soloist and chamber musician in Poland, Austria, France, Germany, United Kingdom, Italy and Slovakia. He participated in the first performances of works created by the Polish composers of younger generation, with whom he cooperates, thereby being keen on extending the repertoire for the guitar. He used to be a member of the jury at the Poland-wide guitar competitions and also in the auditions organized by the Centre of Artistic Education. Likewise he functions as a lecturer at the music workshops and summer courses. 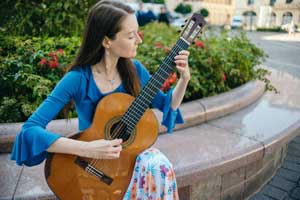 Joanna Baran-Nosiadek graduated from the Karol Lipinski Academy of Music in Wroclaw where she also perfected her classical guitar skills at the postgraduate master studies in chamber music in the class of Professor Piotr Zaleski, she completed them with distinction.

She made a series of transcriptions of the pieces, among others those by Johann Sebastian Bach, Mieczyslaw Karlowicz, Fryderyk Chopin and Karol Szymanowski – for the Cracow Guitar Quartet. She is a teacher of the guitar class in the F. Chopin State Secondary Music School in Krakow. She also conducts masterclasses, likewise she is invited to be a member of juries at music competitions. 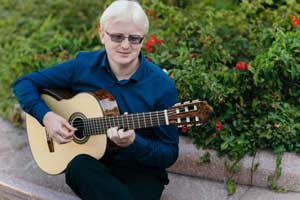 Lukasz Dobrowolski graduated from the Krzysztof Penderecki Academy of Music in Krakow in the guitar class of Professor Michal Nagy and from Musicology Department of the Jagiellonian University. He perfected his guitar skills while attending the master courses that were taught inter alia by Abel Carlevaro, Jorge Cardoso, Eduardo Fernandez, Gerhard Reichenbach or Marco Socias. He was granted scholarships at the University at Buffalo, The State University of New York, The Robert Anderson Research Charitable Trust in London and at the Universidad de Granada.

He also does some research in music in the Musicology Department of Jagiellonian University in Krakow. At present he prepares his doctoral dissertation which is devoted to the guitar concerts by Joaquín Rodrigo. A field of his interest in Musicology is the Spanish and Latin American music.

Since 2004 he has been collaborating with the PWM Publishers in Krakow. Lukasz Dobrowolski prepared also encyclopaedia entries that were printed in the PWM Music Encyclopaedia. He is the author of the first Polish contributions concerned with the biography of Edvard Grieg and Joaquín Rodrigo. 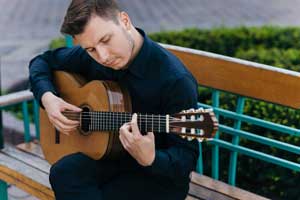 Mateusz Puter graduated from the Krzysztof Penderecki Academy of Music in Krakow in the guitar class of Professor Janusz Sochacki in 2013. From 2014 to 2016, as a postgraduate student, he was perfecting his skills by continuing his studies at the Krakow Academy of Music under the direction of Professor Michal Nagy.

He participated in many national and international guitar festivals and competitions (for example in 2012 he was a finalist of International Guitar Competition in Berlin). The artist has performed as a soloist and chamber musician in Poland, Germany, Slovakia, Czech Republic, Italy and UK.

In 2017–2019 he repeatedly took part in the educational concert projects for children as organized by the Krakow Philharmonic.

The artist is also engaged in didactic activities by conducting the guitar class in the first and second degree music schools.